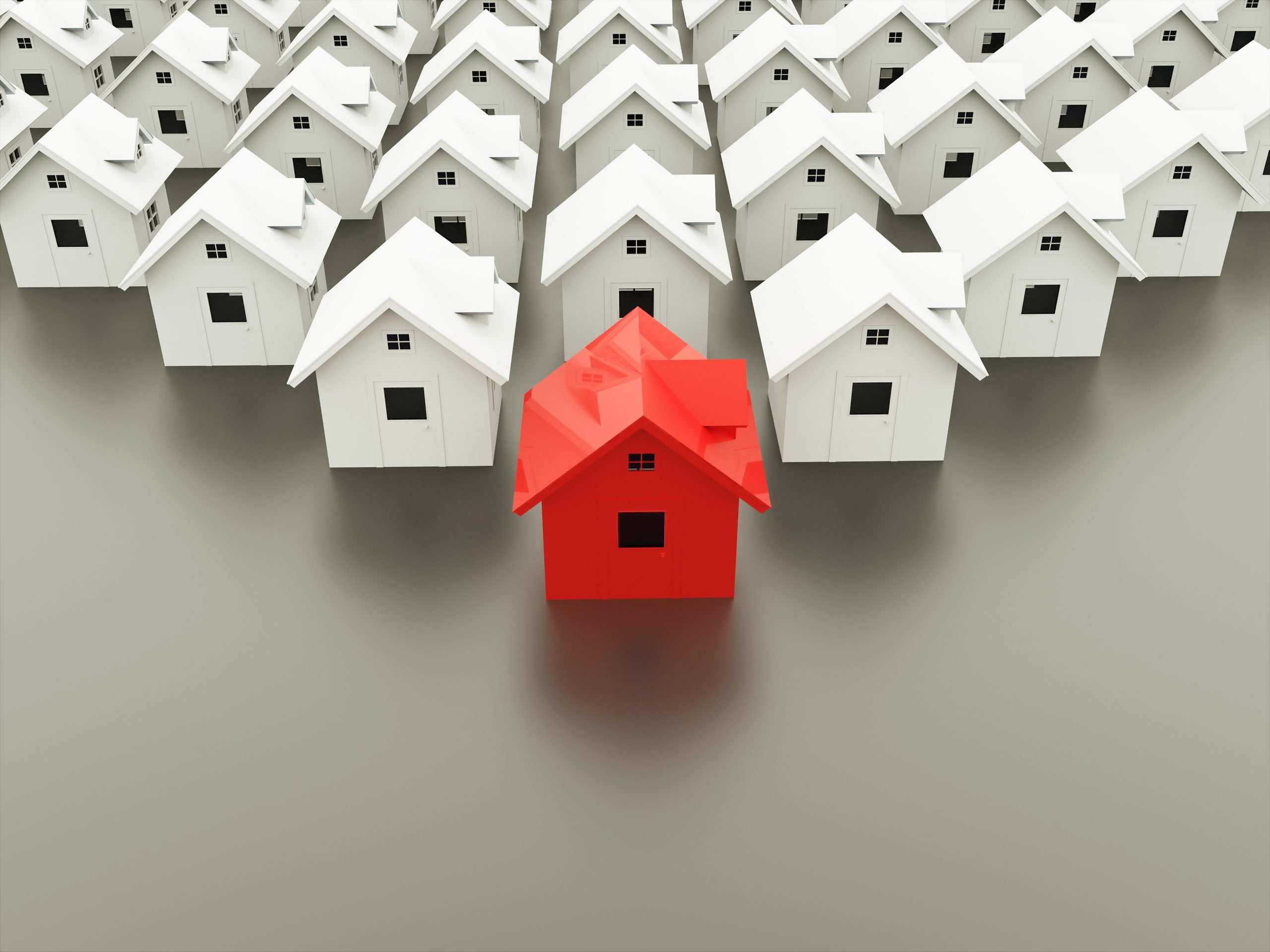 It will come as no surprise to anyone following our Yellowknife real estate market that, upon close review, 2021 turns out to have been a very busy year.  The number of sales was up by 20%, homes sold twice as fast as in 2020 at an average of only 37 days on the market, and the average sale price was up by 8%.  And, of course, this comes on the heels of what was already a record-breaking year in 2020. 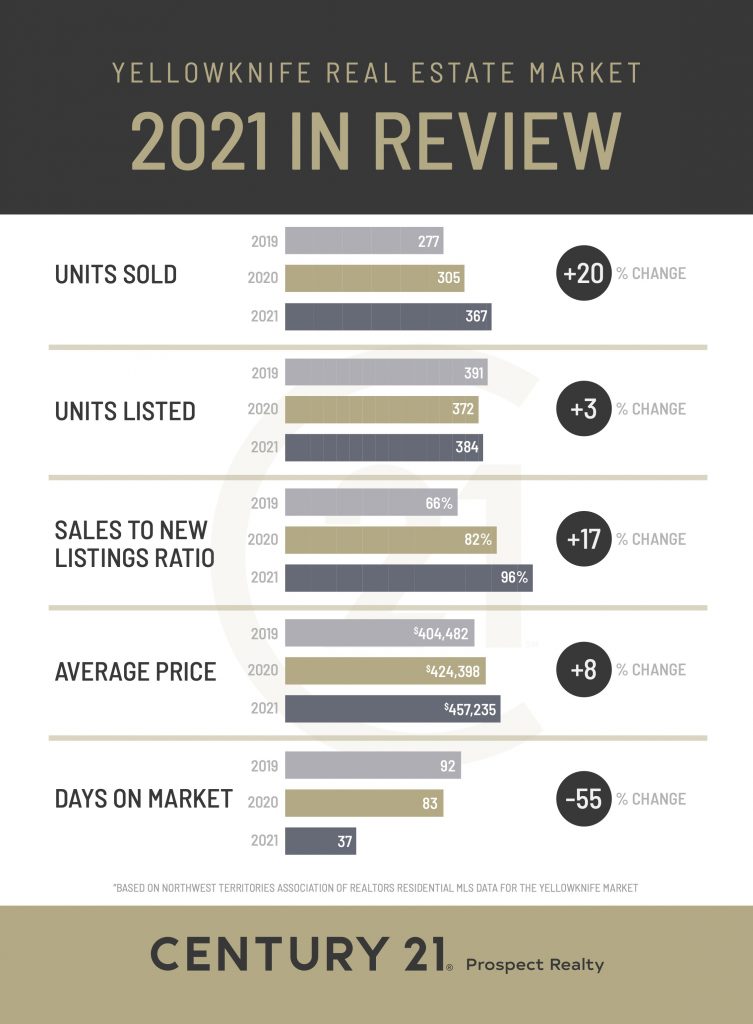 What is perhaps most interesting, though, is that the average price didn’t climb even higher.  One of the most important metrics we track is the sales-to-new-listings ratio, which compares the number of properties that sold in a given period of time to the total number that came onto the market in that same period.  Anything above a 60% is considered a “seller’s market.”  The national ratio for 2021 was 80%.  Yellowknife clocked in at a whopping 96%.  It seems fair to say, based on this, that we are in the midst of a raging seller’s market.

And yet, although we topped this national “market balance” measurement by a wide margin, our average sale price only rose by 8% compared to a stupendous 17.9% nationally.  And although Ontario and BC did skew the national picture somewhat, they were not alone.  For example, somewhat surprisingly, New Brunswick had the largest increase at 34.6%.

If you take a close look at the interactive chart in this CBC article, you’ll see that our mean average price increase of 8% actually came in behind all the provinces, except Alberta and Newfoundland & Labrador.

So, what are we to make of this?  Our inventory of available listings is about as low as it can possibly be.  We have only six active listings as I am writing this.  And yet buyers are not paying 30% more than last year, like they are in New Brunswick.  Why not?

Without surveying the entire home-buying and home-selling population, it is impossible to be certain.  So, this is the point of the article where the hard data gives way to educated guesswork.  Last January I argued that we have been spared from a group of buyers that are driving demand in other markets – mobile workers.  The greatest price increases in places like Ontario have been seen outside of downtowns, in suburbs and neighbouring small towns.  Workers are becoming truly mobile – they have more flexibility in where they choose to work from, so they are choosing more space and lower prices further from metro areas.  But although people may be fleeing crazy markets like Toronto for smaller cities and towns an hour or two away, or even to places like Halifax (which is actively recruiting mobile workers), we haven’t seen evidence that they are fleeing all the way to Yellowknife.  We have been spared the additional demand that these buyers would bring.

And there is another group that is not eyeing Yellowknife to the same extent as other markets – retiring baby boomers.  It has been remarkable to watch market statistics from places like Comox on Vancouver Island.  Month after month we see increases of 20%-30% over 2021, which is perhaps what one might expect in Victoria, but is now commonplace all over the Island.  And in speaking with Realtors from BC it seems as though baby boomers, and especially “lagging edge” baby boomers (born at the later stages of the boom, around 1965), are competing with each other to get their hands on a piece of the lower mainland, and obviously other places like New Brunswick, while they can still afford to do so.  That simply isn’t happening up here in Yellowknife.  Yes, retirees are our fastest growing demographic locally, but the baby boom generation represents a huge chunk of our population, so even if we were to only persuade a small percentage of our retiring seniors to stay here, it would look like huge growth.  And our ability to attract retirees who have not already spent years living and working here is limited.

Baby boomers are affecting southern markets in another way as well – by giving down payment assistance “gifts” to their children.  According to Benjamin Tal at CIBC, gifts hit a record of $82,000 in 2021, and just under 30% of first-time home buyers received gifts.  We don’t know how common this is up here relative to the rest of the country, but it is probably fair to guess that it is more common in markets that were hot even before the pandemic and where demand from retirees and market speculators seems unlikely to subside post-pandemic.  In those hotter markets, parents may be concluding that, since prices may never come back down to a point where their assistance will not be required, they might as well pitch in and help their children out now.  But in Yellowknife, with only 8% appreciation in prices this year and 5% last year, and not much in the way of economic news that is likely to drive growth post-pandemic, our market probably isn’t inducing that same sense of generosity and urgency.

That brings us to the final group that may not be impacting us to the same extent as hotter markets – the aforementioned market speculators.  In our office we have seen an uptick in buyer clients who are purchasing homes as investments rather than as primary residences, but it seems unlikely, given our relatively low year-over-year price and rent appreciation, that investors are targetting us to the same extent as places like Kelowna.

All of this, combined, puts our “raging seller’s market” into perspective.  These are crazy times from one side of the country to the other, but, besides our chronic lack of listings, buyers in Yellowknife actually have it pretty good, relatively speaking.

So, what lies ahead in 2022?  One thing I’m confident that we won’t see, and which you would expect to see in other hot markets, is a boom in new home construction.  In other cities, in the midst of a seller’s market, owners of agricultural land at the outskirts of town would be selling to developers, who would subdivide the land and sell vacant lots for development.  But we don’t have agricultural land, and the process for the City of Yellowknife to get its hands on new land is very convoluted and takes years to complete.  Plus, our current City Council seems committed to promoting infill development over “greenfield’ development.  That said, the City has applied to the GNWT to finally gain control of all the undeveloped land within municipal boundaries, rather than having to apply for it piece by piece, year after year.  So it may be that the development philosophy will change once the City actually has options available to it.  Either way, new land won’t come to market in time to address the current shortage of available options for buyers.

Will rising interest rates cool things off in 2022?  That’s the expectation across Canada, but thanks to rules imposed by the federal government, the average buyer looking for a primary residence already must prove that they can afford to make payments at a considerably higher interest rate than those readily available through banks.  So, on the one hand, until interest rates exceed those “sensitivity test” rates, it’s hard to see the rate increases having that big of an impact. But, on the other hand, the federal government might just increase the sensitivity test rates along with underlying interest rates, which definitely will make a difference.

Property investors are one group that will definitely be impacted by increasing interest rates.  They will soon have to consider the higher cost of borrowing when choosing between real estate and other investment classes.  In some provinces, like Ontario, investors made up as much as 25% of buyers in 2021.  When they start to look to other types of investments, it should have a big impact on markets.

If there is an X-factor this year that could come into play, it might simply be the long duration of the pandemic.  We have now lived through two full pandemic-impacted peak real estate seasons.  As has been well documented in the press, a lot of demand so far has been driven by people who need more space to ride out lockdowns, or to accommodate working from home.  But at some point, many of those people who desire more space will have obtained it, and demand will return to more normal levels.  Will this be the year that happens? It’s very difficult to say, but this is something we will be keeping a close eye on.

Final bit of advice as we head into 2022 peak season – it seems like there are more factors that could lead to a slowing of the Yellowknife market this year than to a further acceleration of the market.  So if you’re looking to sell, don’t wait to see if interest rate increases or a waning pandemic will slow things down.  Assume that they will.  Treat this like a more typical year than what we have seen since 2020, and list your home before the market fills up with competing listings.  Our team of expert Realtors is here to help.  Contact us today at prospectrealty@century21.ca for a free home price evaluation and advice for preparing your home for sale.